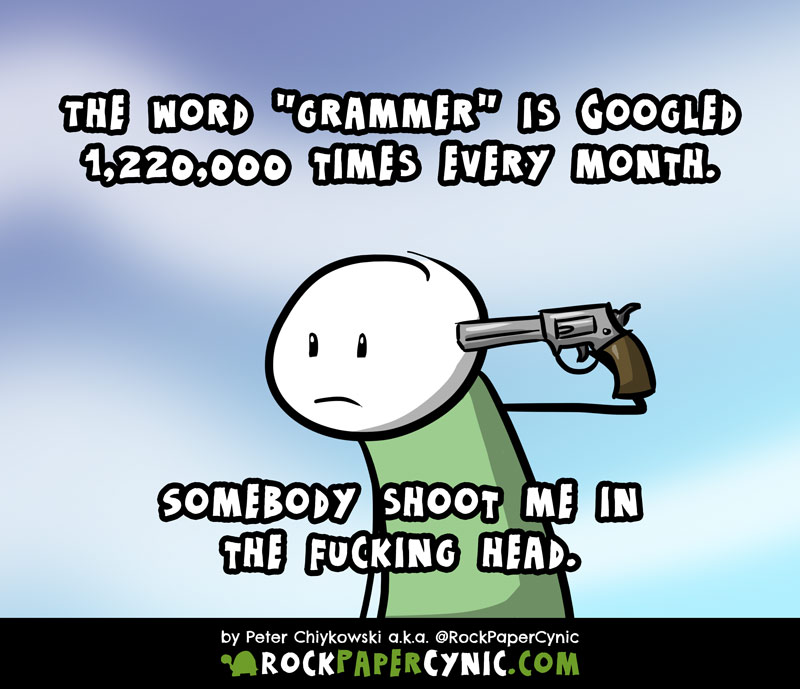 
The Most Depressing Fact About Spelling and Grammar on the Internet

Seriously, grammer (GRAMMER!!!) is searched over a million times every month. And this is just on Google.

Honestly, even though I've made a living off of grammar (ESL teachers, holla!), I totally understand that it's not for everyone. I mean, I don't hold anything against people who have their own functional grasp of grammar, and I have a lot of patience for people who are genuinely trying to learn (or who have found a way to make limited or alternative grammar work for them).

I'm also fairly sympathetic to the typo-prone. Anyone who's delved into the archive (or seen my comics moments after they go up) has probably spotted a few. Heck, I'll be surprised if I get through this rant without one.

In fact, when it comes to the long list of people who bother me, people who impose grammar on others rank much higher than people who struggle with grammar or people with poor typography.

Still, when I discovered the staggering frequency of the search term "grammer," I realized that I didn't have much choice but to report my findings in the most dramatic way possible.